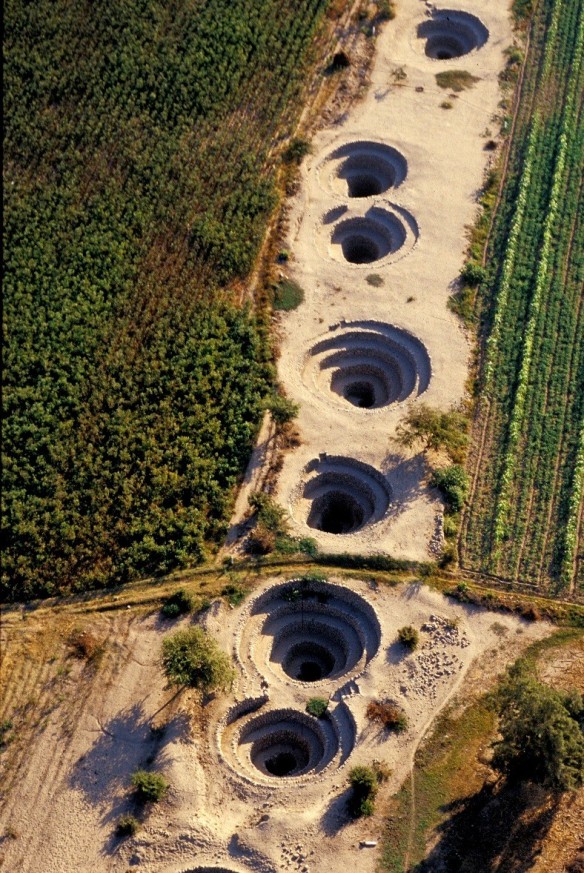 The 20th of April 2016, it appeared on the news: The mystery of the origin of the spirals of Nasca in Peru has been resolved. (BBC Mundo).

The note says, “According to Rosa Lasaponara, of the Institute of Methodologies for Environmental Analysis, in Italy, the puquios were a sophisticated hydraulic system built to recuperate water from the underground aquifers.”

It also points out that, “To assist in transport, funnels were excavated over the canals in shape of spiral bottlenecks.  These bottlenecks let the air into the canals, which forced the water to flow through the system.” “The puquios were the most ambitious hydraulic project of the region of Nasca, and they provided water throughout the whole year, not only for agriculture and irrigation but also for domestic needs, “says Lasaponara, who wrote a book about her satellite studies called, “Ancient World Nasca: New Knowledge of Science and Archeology, which will be published at the end of this year.”

Many years ago, Peruvian scientists had already resolved this mystery, the hydraulic use that they had to provide water to a population, and they pointed out what they achieved in this place, I invite all to read: Acueductos de Nasca and Código Nasca.

In the following view, a stratographical cut of one of the aqueducts is demonstrated.  In it is explained how the waters are taken from the puquiales close to the river, are driven by subterraneous canals, over the length of this tour funnels of elliptical sections have been made to permit the flow through the subterraneous canal; then the canal turns into surface sections upon reaching the height of the land and deposits its precious cargo, the water, in cochas (small pools) where it is stored to cover the needs in case of an extreme dryness.

From this perspective we postulate that this great system of water storage, which permitted development of a great culture, should be considered a marvel of modern hydraulic engineering, for its brilliant deployment of technology and wisdom that is showed here.

Panoramic View of one of the aqueducts of Nasca

Interior view of the underground channel

You can see the used material, stone boulder.

This year, in the month of September, it will be fulfilled that the XXVII Latin American Congress of Hydrology, that in this opportunity, Congress places special emphasis on the topic: From the hydraulic wisdom of our ancestors to the latest technology of sustainable development.  We invite our great community to partake in this important event.

To know our past, to reexamine the great knowledge of our ancestors is the base of our culture and development, besides what it points out to us about the path to a process for adaptation to climate change.